The First Story Part 2 - Holes, TVs, and a Big Box 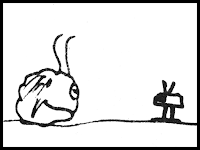 Growing up, my brain craved stimulation (a fact that hasn't really changed). TV and Appliance stores were kind of perfect for someone like me. There were always tons of television screens, sometimes tuned to the same channel, sometimes showing different content. Everywhere I turned there was something going on. I think we had one in Kiester. Or maybe I'm remembering one from one of the neighboring communities. It definitely wasn't "Dick's TV and Appliance." Regardless, we didn't go there often. But when we did, it was a real treat. So, when I wanted an interesting location for the first story for Furble and FC, this store is the first thing that came to mind.

So, there's a hole in the wall. That leads directly from the outside into the store. Hey, it's a comic. No one said it had to make sense.

In comedy, there is something known as the "rule of three." You set up your gag, you give it a little poke, and then you deliver the punchline. Like the old knock-knock joke, where you say "banana" twice, then the third time is the punchline response of "orange." If you run the joke twice, it doesn't have the same comedic impact. If you pull it four or more times, it goes on too long. This isn't to be confused with a "running gag" which is something that comes back multiple times for comedic effect (like the "slap bet" in How I Met Your Mother). I don't know the psychology behind it, but it's there. Now, whether the joke works, that's something else entirely. By the way, this is more than you ever wanted to know about comedy. You're welcome.

Can we address the fact that Furble and FC are part of an advanced race capable of interstellar space travel. Yet, they were fooled not once, not twice, but three times by a television screen (well, a window and a television screen, but you get the point) showing a warm locale. Oh, that's right. It's a comic. Doesn't have to make sense. Just keep that in mind while reading the rest of Furble and FC's adventures.

I initially wanted to do a lot more with the television box. Although it eventually returns after a fashion, the next time we see it is the last time we see it as a make-shift house. I wanted to do a TARDIS gag, making it bigger on the inside than on the outside. But like many plot points throughout the comic's run, it doesn't end up evolving like I originally envisioned for whatever reason.

Oh, and regardless of the stereotypical idea of people living in boxes, it absolutely was not a social commentary. I just remember how much fun a big box could be. There will be plenty of cringy social and political commentary later in the strip's life (we'll deal with that eventually, obviously).

Tune in next week...